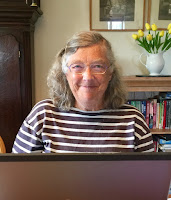 "There were vultures circling above us and I was told to keep moving in case they thought I was dead." 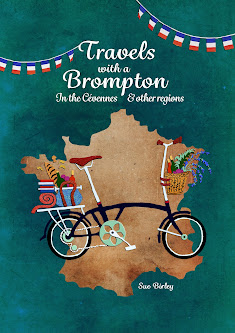 Hello! Welcome to the land of ‘la France profonde à vélo pliable’, or Travels with a Brompton in the Cévennes and other regions, published by Cranthorpe Millner on 26th April. Described by our niece and illustrator (who knows us well) as a ‘wine-fuelled’ account of our many years cycling in France on folding bicycles, Travels with a Brompton tells the tale of an English couple (myself and husband David) as we explore the wild and woolly regions of ‘l’Hexagone’, or mainland France.
It is widely available or can be ordered from the publisher. There is also a Kindle version.
Why the title? Let the opening of my book explain: “On pondering the title of this volume, the quick-witted reader will lose no time in grasping the allusion to a book by Robert Louis Stevenson, Travels with a Donkey in the Cévennes.
In 1878 Stevenson, for reasons best known to himself as winter with its long nights was drawing near, set off on a walking tour of the Cévennes mountain range in southern France, and the book he wrote about it made him famous for the first time.” 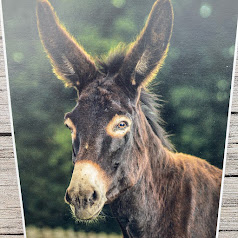 Ruby
The donkey Stevenson took with him was called Modestine but this picture is of Ruby, my adopted donkey at the sanctuary near Sidmouth. She is a great character, as was Modestine. Ruby's favourite party trick is undoing bolted doors with her teeth.
But why a Brompton rather than a donkey, do I hear you ask? And what is a Brompton? Well, as you can see from the pictures, it’s a bicycle with small wheels which folds in three and can therefore be carried with ease on a train. We bought ours as soon as we heard about them (1993), after several attempts at taking 'big bikes' on trains, with varying degrees of failure. 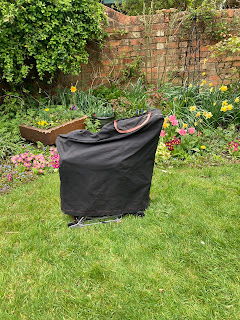 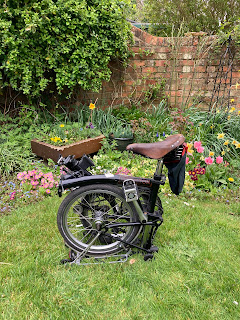 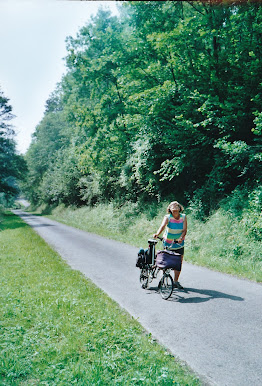 It carries its rider and luggage with ease too, being a very well-engineered and comfortable donkey-bike. Find out more on www.brompton.com
I am so grateful to my publisher Cranthorpe Millner www.cranthorpemillner.com for liking my manuscript and choosing to run with it! Here’s what they told the press:
“Compelling and delightful – cycling travel memoir bursts with joie de vivre. Embracing the ‘slow’ movement before it became one, Sue Birley retells her enchanting cycling adventures through France on a Brompton folding bicycle.” 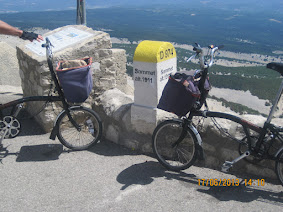 One day we popped up Mont Ventoux...

Hugh Dancy, a very well-read actor who will soon be on our screens in the new Downton Abbey film, calls my book “a tale of great charm, and frankly of daunting endurance”. He says our decision to ‘go folding’ is “logically unassailable, if entirely batty”.
I do hope you enjoy reading the book and even if you don’t, there are plenty of pictures in the website gallery and you must surely delight in the beautiful cover design and illustrations by Becky Ripley. Becky is our niece and in order to get the drawings done in time we locked her in a cellar with a meagre diet of bread and water so that they were done in a trice.
And I do hope that if you don’t already, you will want to take off to that glorious country over the Channel and explore its nooks and crannies. Riding a Brompton will prove to be a great conversation opener, I can assure you! 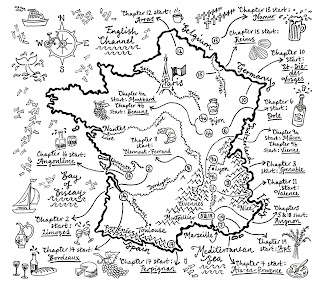